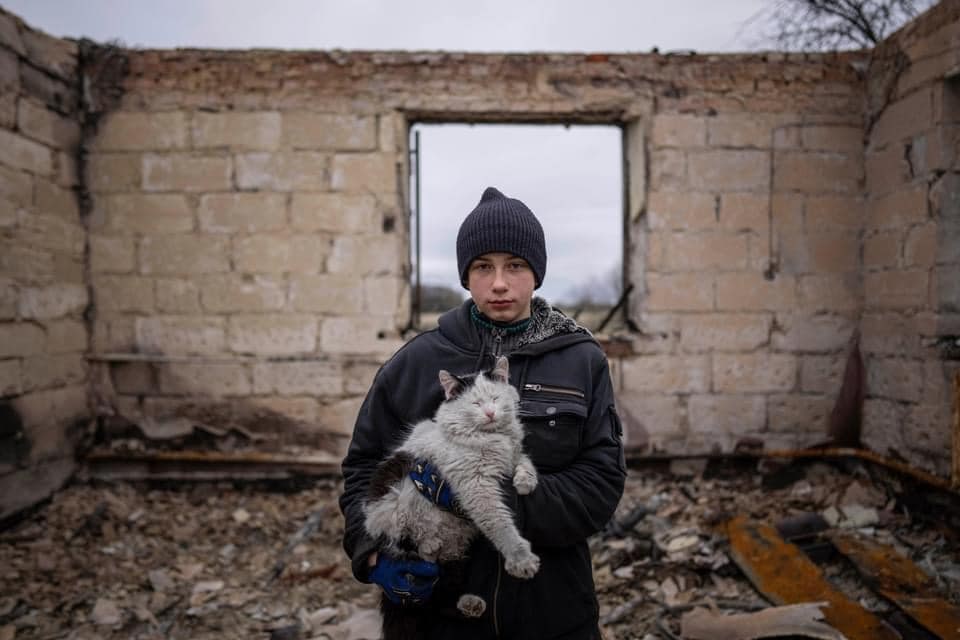 Since the beginning of Russia’s attack on Ukraine, not only have people been victims of the war, but our smaller brothers – animals – have as well. They face incredible cruelty, hunger and thirst, explosive mines, and rocket attacks.

According to Ukraine’s Ministry of Agrarian Policy and Food data, as of 16 June 2022, the official estimated number of animals killed since Russia’s invasion began on 24 February was 42,000 sheep, 92,000 cattle, 258,000 pigs, more than 5.7 million poultry. In fact, these numbers are surely much higher – data collection during active hostilities is challenging to say the least. Active hostilities, limited physical access to farms, and few opportunities to purchase fodder and provide veterinary services are the main causes of animal deaths.

Chornobayivska Poultry Factory reported that 4 million chickens and 700,000 immature birds died due to power outages and lack of employee access to provide care. There are documented cases of animal killings on some farms. In the Chernihiv region, Russian occupiers shot and killed 110 cows on a farm for sport. Intentional arson of horse stables have also been recorded. In Gostomel in March, approximately 20 horses died in a fire, and, while some managed to escape, charred remains of other horses were found at the stables. Other barns have burned following munitions explosions.

Thousands of livestock on farms, domestic pets, and homeless animals need care, food, and water every day. They experience pain, fear, hunger, and thirst, some of them are unable to take care of themselves or find food.

For example, at one of the stables there are horses requiring feeding 5 times a day and watering twice daily. Every day, each horse consumes 10-12 kg of hay and several kilograms of grain mashes and drinks 10-20 liters of water at a go, and benefits from additional nutrients in carrots, apples, and beets. Horse facilities can have 10, 50 or 100 horses, all with similar needs. This is daily work, and there is a constant need for funding to purchase supplies. Animals are not capable of understanding why they suffer without food or water or are left to die.

Approximately 300 dogs died of hunger and thirst in an animal shelter in Borodyanka during the occupation. Hundreds of other animal shelters found themselves in difficult conditions. Most of the challenges of animal rescue fell on the shoulders of volunteers.

Ukraine’s UAnimals publishes daily reports on its Facebook page about support for numerous animal shelters, animal foster volunteers, owners struggling to care for their pets, and rescued animals handed over by the military. Volunteers feed some animals on the streets, visiting them where they live. At present, there are a number of emergency facilities sheltering household pets and livestock at varying scales, from thousands to hundreds or just a few animals.

There is a constant need for monetary contributions for the purchase of feed for animals, provision of veterinary care, and evacuation. This effort is extremely important that there are such dedicated organizations and volunteers in Ukraine. There are many volunteers, and they save lives every day. Rehabilitation centers for wild animals and zoos also need support – they also face the possibility of sudden destruction by munitions. In the first days of the war, the 12 Months Zoo in Kyiv region was occupied. During the month-long occupation, it was impossible to maintain suitable environments for the animals or feed them, and evacuation was also not possible either. Feldman Ecopark near Kharkiv ceased to exist following extensive shelling. Six people were killed trying to feed or evacuate the animals, infrastructure and enclosures were destroyed. Some of the animals were rescued.

Wild animals also suffer in wartime. Birds, baby foxes, and fawns with various injuries are admitted to wildlife rehabilitation centers. These are just the ones who were found and brought to the veterinary clinic, while thousands more wild animals are not so lucky. Wildlife is threatened by missile strikes, artillery fire, land mines, grenade tripwire entanglements, fires, damage to internal organs due to explosive blast waves, and noise disturbances. Animals cannot be evacuated from commercial hunting sites.

In the Black Sea, dolphin strandings have increased as has the frequency of entanglements in fishing nets, potentially caused by the presence of military boats operating powerful acoustic devices and explosions. Marine mammals may be at risk of direct damage and destruction from explosions, acoustic trauma gradually leading to starvation or spatial disorientation and stranding, and fatal acoustic trauma. Together with Turkish researchers, Ukrainian experts are studying these issues, including collecting tissue samples from dead dolphins. These will be sent for further study in an attempt to determine cause of death.

The war is also a tragedy for household pets, many of which are left behind by their owners. Some were rescued, some were reunited with their owners, but some animals died of hunger and thirst in shuttered houses and apartments. Some animals were lost during evacuation, fleeing in fear. There are constant reports of animals being hit by cars and injured. Some, unfortunately, were abandoned by their owners.

There is also intentional physical abuse of animals. There is a well-known story about a dog named Lys who was beaten and then injured by a mine near Makarov. The dog could not walk and lay in a garbage pit until local people found him and called rescuers to rehabilitate him. Another dog was found painted with the inscription “Fool.” Ukrainian Armed Forces soldiers rescued the dog and handed it over for treatment.

Cases of abduction of animals are also known. In particular, a cat named Max from the town of Bucha escaped kidnappers in Belarus and local residents there reunited him with his owners by calling the number on his collar.

Also, Armed Forces of Ukraine soldiers and State Emergency Service rescuers are constantly rescuing animals. This is incredible courage and valuable work. The people of Ukraine are proud of their defenders. Looking ahead to reconstruction after the war, we must create a network of state shelters and rehabilitation centers for animals in every region of Ukraine. This should include a network of veterinary clinics, special animal rescue service, database of animals and private and public assistance centers, established evacuation protocols, special animal protection funds, and animal protection and rehabilitation educational programs.

Here are some trusted organizations that need support now for their work in animal protection, evacuation, rehabilitation, and family reunification programs:

UAnimals advocates for humane and non-exploitative treatment of animals. Since the war began, UAnimals has focused on rescuing animals from combat zones and occupied territories.

About the author: Kateryna Polianska is an ecologist at “Environment-People-Law”, an international NGO based in Ukraine. She is based in Kyiv, where she is studying the war’s impacts on Ukraine’s natural complexes. For the last decade, she has been caring for horses at a stable near Kyiv. Contact her at k.polyanska@epl.org.ua