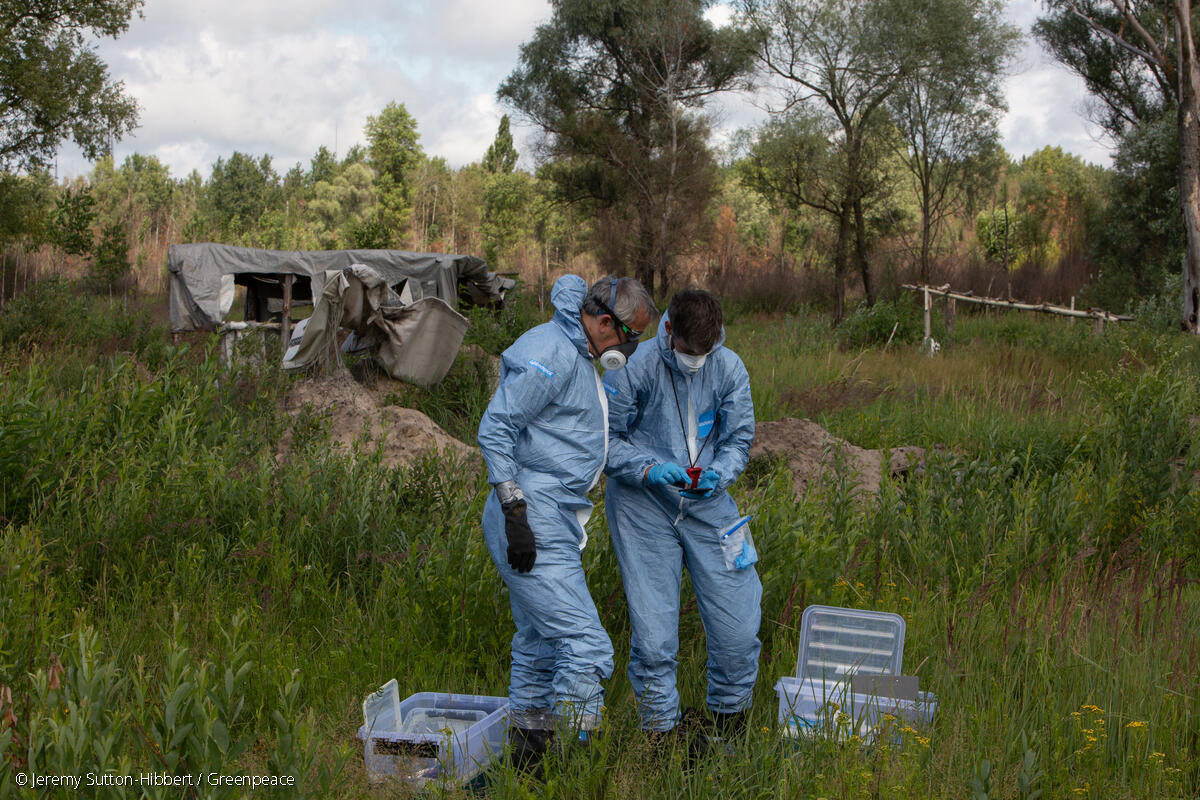 Note from UWEC: In July 2022, representatives of Greenpeace Germany, together with Ukraine’s State Agency for the Management of the Exclusion Zone, carried out an investigation of the consequences of Russia’s military invasion of the Chornobyl zone. The results were presented in Kyiv at a joint press conference that took place on 20 July. We are publishing our translation of independent environmental resource Green Belarus’ article summarizing the results of this investigation.

Greenpeace investigated radiation levels in the 30-kilometer Exclusion Zone near the Chornobyl Nuclear Power Plant with the approval and cooperation of Ukraine’s State Agency for the Management of the Exclusion Zone (SAMEZ) and the Ukrainian Ministry of Foreign Affairs,

Their research showed that radiation levels in areas where Russian troops were stationed, dug trenches, and from whence they conducted active military operations are at least three times higher than the levels measured by the International Atomic Energy Agency (IAEA) in April 2022.

At a Russian military camp near Yanov Station, Greenpeace measured radiation dose rates ranging from 0.18 µSv/h (microSieverts per hour) up 2.5 µSv/h at a height of 10 centimeters above ground. The highest rate exceeds IAEA’s measurement by three times. In another example, the dose rate reached 7,7 µSv/h at a site 1.5 km from the former Russian checkpoint and near the Red Forest, much higher than the IAEA reported.

In April 2022, that agency presented very limited data on radiation levels in the area, describing them as “normal” and not presenting a serious problem for the environment or public safety.

Greenpeace is concerned that “the IAEA is seriously compromised in its nuclear safety role in Ukraine due to its connections with Russia’s Federal Atomic Energy Agency (Rosatom), including the IAEA’s current deputy director Mikhail Chudakov, a long-time former Rosatom employee,” the organization noted in a press release.

“Understanding the complex radiation effects at Chornobyl is essential for the world and that means conducting research and working with international scientists. All of that has been put at risk by Russia’s war against Ukraine,” said Shaun Burnie, senior nuclear specialist at Greenpeace Germany, during the press-conference.

“Scientists and workers conducting essential radiation hazard monitoring are now threatened by an unknown number of Russian landmines and anti-personnel explosives. This is one further outrageous legacy of Russia’s illegal war and a crime against the environment and global science. The IAEA appears reluctant to explain the scale of radiation hazards at Chornobyl and the impact of the Russian occupation,” he added.

According to Burnie, the IAEA does not want to explain to the world the true aftermath of the intrusion of Russian troops into the exclusion zone and the Chornobyl Nuclear Power Plant itself.

Lead radiation specialist at Greenpeace Belgium Jan Vande Putte added: “We measured levels of gamma radiation inside the abandoned Russian trenches that qualify it as low-level nuclear waste. Clearly the Russian military was operating in a highly radioactive environment, but that’s not what the IAEA is communicating. We can only conclude that the IAEA for some reason decided not to make an effort to fully investigate. It’s clear from our survey that there is nothing normal about the radiation levels inside the Chornobyl Exclusion Zone, despite what the IAEA wants the world to believe.”

In their investigation, Greenpeace and Ukrainian experts used both data received from drones and satellites and analysis of samples taken directly in the Zone.

In samples that were measured in a mobile field laboratory, there was a sharp contrast in Cs-137 concentrations, ranging from 45,000 Bq/kg to less than 500 Bq/kg.

Measurements collected by a purpose-built drone working at a height of 100 meters revealed even higher radiation levels in a wider area toward the south.

Greenpeace specialists noted that they were unable to reach all parts of the Zone because some of these sites have not yet been cleared of landmines. However, it is already clear that disturbance of soil layers in the Zone can expose more polluted soils from other layers, which can, in turn, “lead to a higher level of radionuclide migration in the environment.”

Russia’s military operations have inflicted serious damage to the Zone’s unique scientific infrastructure that was developed in cooperation with the world scientific community. It also puts further research on the consequences of the Chornobyl catastrophe in question.

Comments (22) on “Influence of Russia’s military intrusion on the Chornobyl Exclusion Zone: Results of an independent investigation by Greenpeace International”