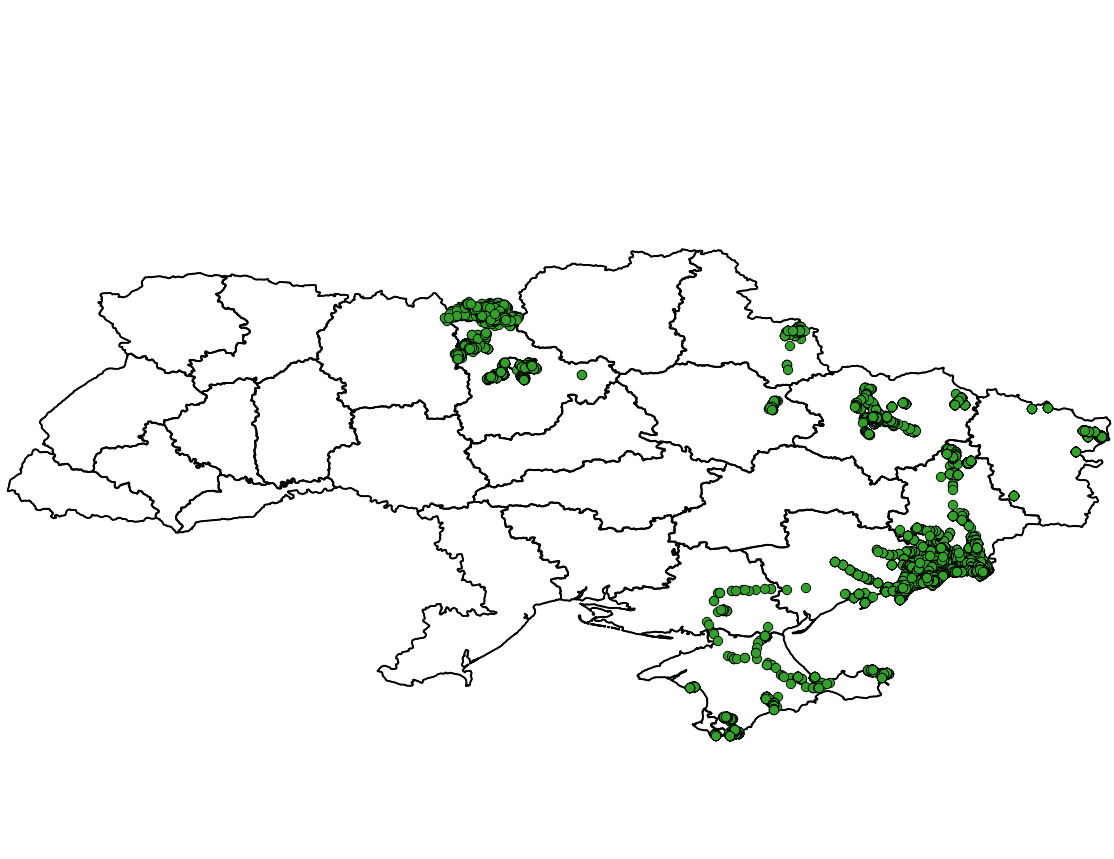 Oleksii Marushchak is Chief Data Manager at Ukrainian Nature Conservation Group (UNCG). UWEC Work Group invited him to describe data management and security in wartime conditions. UNCG is actively involved not only in scientific research of Ukrainian biodiversity, creating and supporting Nature Reserve Fund sites, and environmental education on different levels, but is also playing a key role in saving at-risk data and making it more widely accessible among scientists.

Russia’s military aggression in Ukraine resulted in millions of people becoming forced migrants both inside the country and abroad. The total number of displaced people is estimated at 15 million, of which eight million fled Ukraine. For many victims, evacuation is a quick decision when their settlements are under fire from high-precision rockets and artillery. In such situations, the priority is saving their own lives and those of their family members, taking necessary medicines, documents, pets, money, etc. with them. Unfortunately, scientists, particularly biologists, are no exception.

Currently, at least 100 botanists, zoologists, ecologists, and conservationists have been displaced. Most of these people were forced to leave Ukrainian regions, cities, and villages currently either occupied or located on or near the front line. These researchers have collected unique material and data on biological diversity for many years. Often these data are not stored electronically, but rather in field diaries, phenological observation registration cards, notebooks, and tables filled in by hand. The situation is even more difficult for botanical collections that are bulky and not easily transportable. These challenges apply both to individual scientific achievements in the biological sciences and to the vast collections of data held at nature reserves and national parks.

Some of Ukraine’s oldest nature reserves are currently under Russian occupation. For example, the currently occupied Luhansk Nature and Ukrainian Steppe Reserves were established in 1926. The Ukrainian Steppe Reserve’s administration was captured by the Russians in 2014, and during that first winter, all diaries, collections, herbariums, and phenological observation data were burned in the furnace. It is possible that those lost materials were the most important data for long-term observation of changes in the ecology of Ukraine’s steppes.

After the start of the full-scale invasion of Russian troops into Ukraine in 2022, 44% of all nature conservation areas were under occupation, including four nature reserves, two biosphere reserves, and 17 national natural parks. In addition to the threat to the landscape itself, there was an even greater threat to the preservation of knowledge about these territories. Nature Reserve Fund (NRF) employees are the bulk of regional biodiversity specialists and, in addition to data on the reserves and national parks themselves, they also possess extensive materials on regional biodiversity.

This information is critical for assessing global climate change and, by extension, for implementing the requirements of several international conventions on the protection of rare species at the European level. The data is also essential for identifying new habitats outside of existing protected areas in need of priority protection.

The uniqueness of such data is undeniable, often including monitoring studies conducted both within the framework of large projects and at the initiative of scientists themselves. Such records contain valuable biodiversity data, abundance estimates, and the current status of rare, baseline, and invasive species of plants, animals, and fungi. This information is used for the purposes of nature protection, creation of national and regional Red Books for endangered species, applied and fundamental scientific research, and in representing the community of Ukrainian biologists in the global scientific arena.

As for data on the biodiversity of existing nature reserves, it is worth remembering that a significant number of biology theses at Ukraine’s National Academy of Sciences were written on the grounds of reserves, using the long-term observations available in their archives. Loss of primary data – the foundation of fundamental biological science gathered over many decades – can also negatively impact prospects for the development of science itself given that most profound conclusions can only be drawn on the basis of comprehensive, systematically collected material.

During military hostilities, vast quantities of data can be destroyed beyond any possibility of recovery. If a scientist stores everything using electronic cloud services (at a significant price) or on electronic devices, evacuation is simpler. And if not? Where data is less portable, being left in occupied territory presents an enormous risk of destruction caused by shelling, looting, fires, or unpredictable storage conditions (rain, wind, excessive humidity, etc.). Experience has shown that most scientists did not take their materials out of the occupied territories. Herbariums and collections cannot be taken out at all in conditions where it is practically impossible to cross Russian roadblocks carrying just a laptop. Many scientists evacuated without their сollections and written studies, hoping to return home after a short period and resume work at universities or reserves.

In 1943, during the German occupation of the Askania-Nova Reserve, a large portion of the institution’s museum collections was stolen or destroyed, including collection specimens of previously undocumented insects. Similarly, during Stalin’s repressions in the 1930s, the archives of the former Koncha-Zaspa Reserve, where a large number of outstanding scientists worked, were destroyed.

Today, the situation is repeating and there is again a risk of losing hundreds of thousands of data records regarding species considered rare in Ukrainian biodiversity terms. This has further implications for the potential loss of vast amounts of factual information used for conservation purposes. Without this data, we lack a starting point for comparing the pre-invasion state of biodiversity and the environment as a whole to what it will be after the war ends. This data enables adequate assessment of not only economic losses, but also natural losses, and the degree of damage caused by Russia’s military actions in Ukraine.

Moreover, biodiversity data and the status of biodiversity during wartime are equally important. Firstly, as already described above, they are at a minimum a record of crimes against nature caused by the war.

For example, it is important to document alleged mass mortality of cetacean species in the Black and Azov Seas. Today, experts have not reached consensus regarding the possible cause(s) of this mortality: infection, pollution, or the work of the Russian navy (radar, sonar, noise disturbances, fuel, and lubricants, or something else). Field data collection will definitely help to uncover the truth.

Facilitating the work of scientists during wartime supports Ukraine’s economy, bolsters scientific prestige, and ensures the active participation of Ukrainians in international projects aimed at environmental protection and fundamental and applied biological research.

One answer to this challenge (among possible, but definitely effective answers) is the timely and urgent digitization of data collected in previous years by Ukrainian scientists. Consolidating evacuated material in a digitized format and storing it on open access virtual platforms will facilitate preservation of those many years of work, as well as making them available to a broad international scientific community for appropriate use. UNCG is participating directly in saving and digitizing this data.

One such platform, the most widely used in the world, is the Global Biodiversity Information Facility, or GBIF for short. Since the beginning of the full-scale war, the Ukrainian Nature Conservation Group has been able to collect and publish more than 86,000 records of Ukraine’s biodiversity. These are accurate scientific records documenting and confirming Ukraine’s fauna and flora. Such data includes exact dates, geographic coordinates, notes about the population, and other information.

One example of such data storage is the dataset authored by Oleksandr Bronskov, an internally displaced person (IDP) and employee of Meotyda National Nature Park. Since 2014, he has worked out of an office near Mariupol. His workspace contains 31,411 ornithological data points in the northern Azov region over the period from 2004 to 2022. This dataset represents the enormous results of many years of work and monitoring studies.

Another example is a dataset consisting of 4,898 records gathered by Mykhailo Rusin, an employee of the Kyiv Zoo. His archive contains information on small mammals in the Luhansk region (now, unfortunately, almost completely occupied by Russia). Nina Polchaninova, an employee of Karazin-Kharkiv National University and currently evacuated, has built a number of datasets on spider records over the past few decades. The total number of findings published in her datasets is currently 5,271 and it covers the territories of Donetsk, Kharkiv, and Luhansk regions. Most of these finds are digitized biota record cards that could easily be destroyed by fire. Currently, more work is in progress and several more datasets are being prepared for publication.

Datasets that were collected and published during this “rescue” initiative include species-specific data being published on GBIF for the first time. Overall, UNCG’s profile on GBIF shows that it has published 300,000+ species data points since 2020.

Several additional proposals are now under consideration. Dozens of scientists have already received critically important financial assistance as well as the opportunity to prepare their data for publication in wartime. Despite the conditions of delayed salaries, unemployment, job loss or cancellation of a huge number of related research projects, Ukrainian scientists have opportunities to continue their work, publish, participate in conferences, and generally support scientific activity at a high level, at least as far as that is possible during the war.

UNCG members are pursuing opportunities to secure additional support for Ukrainian scientists. Saving research data will allow Ukraine to preserve the achievements of many years of field research and, in doing so, to save a scientific foundation for Ukraine’s use and development in the post-war period.

Comment (1) on “Saving scientific data during war: how is it possible and why it matters?”