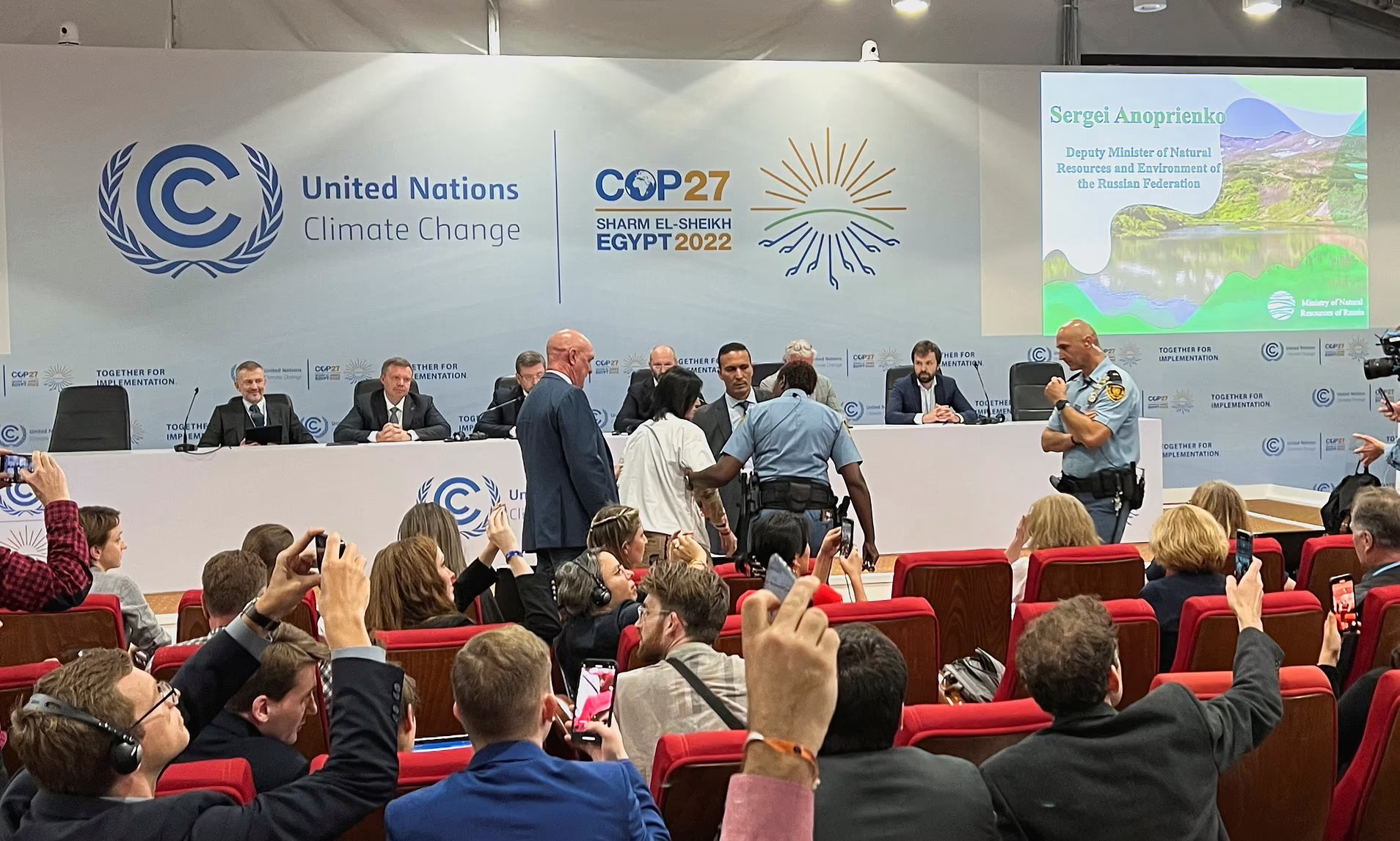 At the United Nations Climate Change Conference 27 and without directly addressing the war in Ukraine, Russia called for developing international climate cooperation and avoiding technological and trade barriers during the transition to low-carbon production.

Russia has been a participant in climate negotiations since the advent of the UN Framework Convention on Climate Change. Russia’s climate policy has had ups and downs and periods of denial followed by concern and interest, as happened in 2019 when Russia adopted the Paris Climate Agreement at the last minute. There are still disputes to this day about what prompted that move: announcement of a cross-border carbon regulation in the EU affecting the main importers of Russian metals and energy carriers, or with growing concern among the Russian population.

One way or another, Vladimir Putin raised the issue of climate change much more often, pointing out its importance and the need to reduce emissions. This despite the fact that back in 2020 he stated that solar activity still played the leading role in climate change and that humans had no significant influence.

The government even passed generous new laws, such as the Low-Carbon Economic Development Strategy, the Sakhalin experiment, a law on reducing greenhouse gas emissions, and many other similar initiatives.

Before the UN conference in Glasgow last year, Putin announced the goal of achieving carbon neutrality by 2060, joining the global movement at the last moment. At that conference, Russia kept a low profile but remained committed to limiting warming to 1.5 degrees.

This year’s COP 27 Climate Conference took place in Sharm El-Sheikh. Environmental activists had many questions about the choice of conference location, given the sheer number of human rights violations in that country. Conducting the conference in Egypt was perceived as an attempt to shift the focus away from civil society challenges to leadership in the fight against climate change.

The Russian delegation also sought to use its participation in the UN conference to show that sanctions interfere with fulfillment of climate obligations while also advancing its own unique approach to addressing the global problem.

The final resolution by participating countries was adopted at dawn on Sunday. Weary negotiators were able to agree on one positive result – the establishment of a fund to compensate vulnerable nations for climate crisis loss and damage.

Developed countries – having achieved success primarily due to the fossil fuel industry’s rapid development and the primary source of not just money, but also accumulated greenhouse gasses in the atmosphere – have committed to pay for the damage experienced by the most vulnerable countries. These countries are already suffering significant losses caused by natural disasters with huge numbers of victims: floods, extreme heat waves, droughts, and fires. First and foremost, these are nations of the Global South.

Many questions remain: who, how much, and when money will be deposited in this fund and which specific countries will be determined to be vulnerable. It is encouraging that the hypothetical $100 billion dollars annual agreement made in Paris in 2015 is beginning to materialize.

Russia’s place in this process is ambiguous. Including Soviet era indicators, the country ranks third in the world in cumulative emissions since the beginning of industrialization. However, Russia is clearly not planning to compensate vulnerable countries. Nevertheless, the country fully supported the creation of such a fund and expressed solidarity with vulnerable countries.

“Rising inflation and public debt create additional challenges for developing countries and make it more important than ever to scale up climate finance and ensure easier access to needed resources. Least developed and small developing states are in a particularly vulnerable position. (…) Developed countries must demonstrate leadership and increase the volume of financial resources and technologies provided to developing countries,” said Ruslan Edelgeriev, climate adviser to the President of Russia.

Not yet agreed: fossil fuel transition

When it comes to transitioning away from fossil fuels (a leading source of emissions), everything is less clear. Participating countries continue to support the Paris Agreement’s goal to limit the global temperature increase to 1.5˚, but are not, in practice, prepared to rapidly reduce the use of coal, oil, and gas.

The United States and Arab countries are willing to reduce coal use because they have oil. Coal-burning states China and India have responded by proposing to reduce the use of “all fossil fuels.” In the end, the move away from fossil fuels has not progressed in any direction.

When amendments were made to COP 27’s final decisions, the Russian delegation, which had not previously participated actively in the negotiations, instead silently agreeing with everything, decided to oppose the energy part, saying that this was not an “energy forum.”

At the same time, Russia believes that the Parties should be inclusive and avoid measures that could worsen the energy situation for developing countries.

For example, transitioning to renewable energy is not suitable in all cases. In the Russian delegation’s view, other low-carbon sources exist, such as nuclear power and gas. Russia itself relies on these, given that its share of renewable energy sources is less than 1% in its total energy balance.

Surprisingly, Russia’s objections were taken into account, and “low-emission sources” were added to renewable energy sources, which was to a certain extent a victory for Russia in promoting “technological neutrality.”

At the time of the conference, Russian troops were methodically disabling Ukraine’s energy grid, as well as shelling civilian targets. Meanwhile, the Russian delegation neither mentioned the subject nor did it offer any explanations either in the media or at conference events themselves, avoiding direct questions about reparations for the damage caused to Ukraine’s nature and people during hostilities.

For the first time in the summit’s history, Ukraine had its own pavilion, the main theme of which was the ongoing war and plans for the nation’s green recovery after the war’s end. The pavilion offered events on the topics of abandoning Russian energy transportation and calculating environmental damage resulting from military operations, including greenhouse gas emissions.

Without commenting on the war in any way, the Russian delegation representatives lamented the sanctions as an “unfair” restriction on international cooperation in the development of low-carbon technologies and sought consideration of the climate agenda as an area of international dialogue and cooperation.

“If it were not for sanctions, restrictions, or other discriminatory approaches, the Russian Federation could have achieved carbon neutrality sooner,” commented Ruslan Edelgeriev.

He also stated that EU countries cannot complete their transition to green energy because they have rejected Russian gas.

Edelgeriev lamented that the world had changed after the Glasgow conference: “We are moving away from meeting the Paris Agreement’s temperature goals and encountering disagreements on the climate agenda’s main issues. And at the same time we are seeing the introduction of artificial restrictions that worsen the quality of life for people in many countries.”

Nevertheless, the Russian authorities’ cynical statements ignoring the reasons for sanctions did not convince anyone. Many world leaders mentioned the war and the resulting energy crisis in their speeches.

Ultimately, the war did not become a central theme for the entire conference. Instead, most attention was focused on issues of financing and adaptation to climate change. It was a COP where great attention was paid to the problems experienced by African countries and the approaches of those countries in their fight against climate change. This rhetoric was also supported by developed countries.

Despite the planet’s energy crisis, the Framework Convention’s signatories did not abandon their obligations related to compensation for loss and damage resulting from climate change in the most vulnerable countries.

The Russian delegation’s official event deserves a separate story. It began with a protest of Ukrainian activists accusing Russia of war crimes; the activists were escorted from the room.

It seemed that the delegation was prepared for this development and Russia sought to focus on climate rather than politics. The event continued with speeches by representatives from the Ministry of Natural Resources, Rosatom, Ministry of Education, Russian Union of Industrialists and Entrepreneurs, and the All-Russian Society for Nature Conservation.

The most striking speaker was Andrey Melnichenko, head of Siberian Coal Energy Company (Russia’s largest coal company) and leader of the Russian Union of Industrialists and Entrepreneurs Committee on Climate Policy and Carbon Regulation, and who, despite sanctions, was a member of the Russian delegation.

In his speech, he questioned the need to deal specifically with anthropogenic emissions, which, according to him, make up only 6% of the global carbon balance. This prompted dissatisfaction not only among the conference’s ordinary participants, but even bewilderment among his own colleagues.

“The Earth’s carbon balance – emission and absorption of greenhouse gasses – is roughly 840 gigatonnes of CO2. But efforts in the world community, primarily Western countries, to reduce emissions focus only on anthropogenic factors which constitute just 6% of the total,” Melnichenko said.

Melnichenko expressed puzzlement that other sources of carbon emission and absorption are ignored in the conventional model.

“It would seem like the disproportion is obvious. But why are we acting in this way?” the businessman wondered.

It is not completely clear what Andrei Melnichenko meant to say. However, Russia’s meteorological service Roshydromet, the head of which moderated the delegation’s presentation, released a third assessment report on climate change and its consequences for Russia this year.

The report indicates that the cause of all catastrophic phenomena is anthropogenic growth in the concentration of greenhouse gasses, and that hypotheses about the dominant role of natural factors are not supported by reliable scientific evidence. The report’s authors write:

“The Russian Federation must fulfill its obligations under the Paris Agreement and reduce domestic greenhouse gas emissions. In addition to reducing the use of fossil fuels, it is necessary to focus on sustainable agriculture and energy and resource-efficient economies. Steps in these directions will lead to the development of not just “clean” energy, but also to the processing of waste and recyclable materials, in turn creating demand for new jobs in these economic sectors, as well as in construction, science, and education.”

Other performances were traditional for Russian events. In particular, they promoted nuclear energy as the cleanest energy source, ignoring the entire nuclear cycle, from mining to storing nuclear waste.

There was also talk of the “incredible” firefighting efforts that are more likely attributable to the rainy summer rather than targeted government action. They also discussed the possibility of recalculating carbon flows in Russian ecosystems, since no one is abandoning attempts to increase the absorption capacity of forests to the levels necessary to achieve carbon neutrality by 2060.

There is no video of the Russian side event on the UN’s website, where records of all such events are published. It is significant that the head of the delegation himself missed the sole official Russian event at the conference, although his opening remarks appeared in the original program. The Russian event ended with a proposal by Vyacheslav Fetisov, famous hockey player and head of the All-Russian Society for Nature Conservation, to play hockey on a nuclear icebreaker in the Arctic.

Russia received the “Fossil of the Day” award for this side event. Awarded by the Climate Action Network, which includes over 1,000 climate NGOs around the world, Russia was also nominated for Fossil of the Year for statements denying the conclusions of climate scientists and promoting false solutions, thus delaying any rapid reduction in emissions, not to mention the energy crisis caused by its invasion of Ukraine.