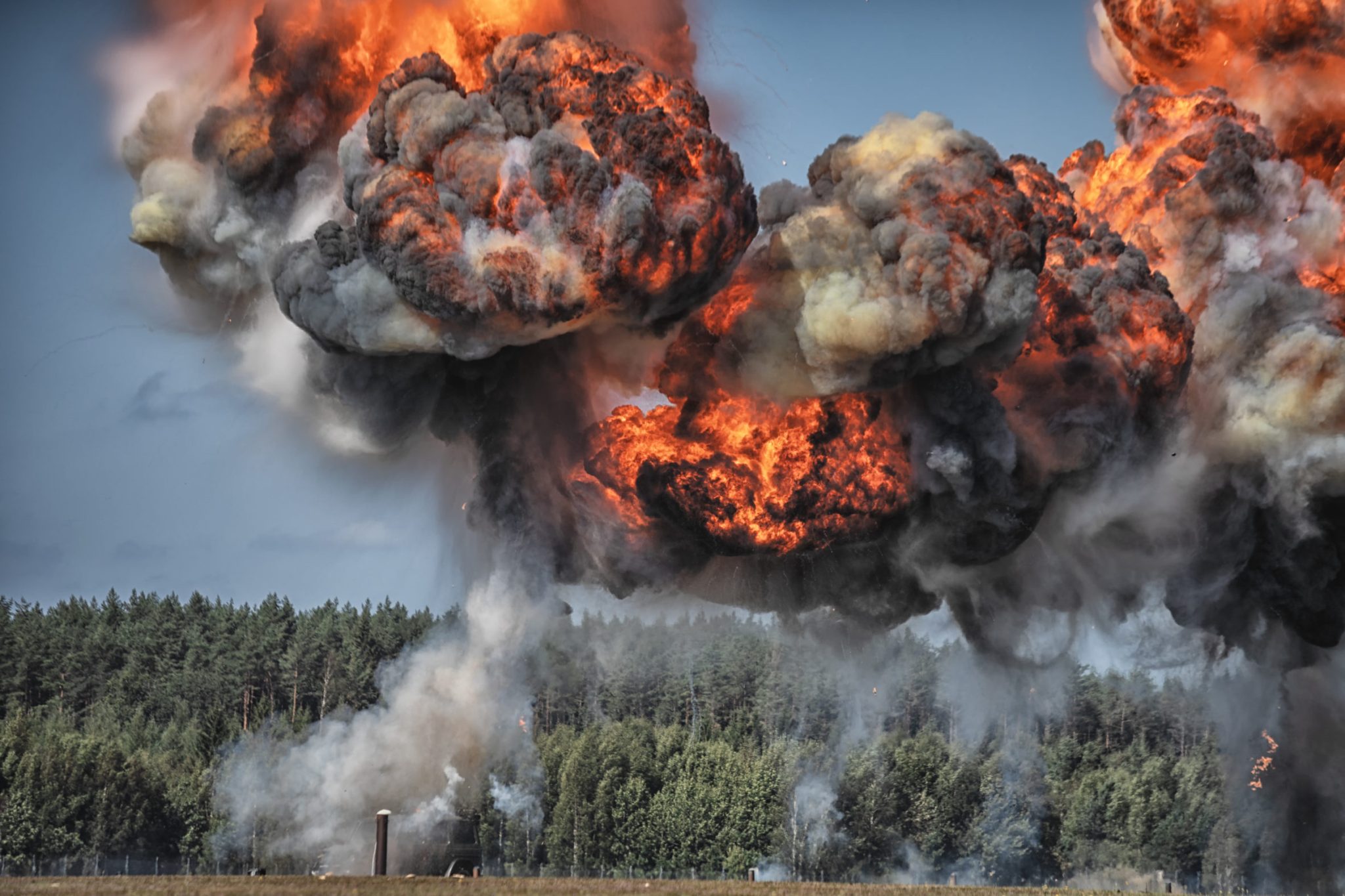 A publication of the UWEC WG

At the end of May and early June, the most active combat took place in the Luhansk and Donetsk regions, with particular intensity in Severodonetsk. The highest density of shelling occurred in that city, resulting in the almost complete destruction of its infrastructure. Street-fighting took place there as well.

A tank containing nitric acid at the Azot plant exploded during shelling on May 31, resulting in a release of toxic substances into the atmosphere. Local administration chief Sergei Gaidai urged city residents to shelter in place in order to avoid exposure.

An ammonia pipeline was also damaged during combat in the Bakhmutovsky district in Donetsk region in early June, also resulting in environmental pollution.

Located not far from Severodonetsk and Slovyansk, Sviati Hori National Park is located directly in the conflict zone. The unique chalk mountains on the banks of the Siversky-Donets River are habitat for many Red Book-listed species. The park is also a refugium for a unique Scotch pine subspecies (Pinus sylvestris var. cretacea Kalenich), present here since before the last Ice Age.

Unfortunately, the majority of the national park has been damaged by fires resulting from the fighting. The remaining territory has been mined and/or contaminated by fuel, both rocket and vehicular.

The EU passes a softened embargo for Russian oil

After lengthy discussions, the European Commission approved a sixth round of sanctions. They include an embargo on oil and petroleum product deliveries from Russia that will come into full force beginning in 2023. The proposed sanctions were debated and adopted with the abstention of three countries – Hungary, Czech Republic, and Slovakia – that acknowledged a “significant” dependence on Russian oil and did not oppose the proposal.

According to Politico, the main focus is a ban on deliveries of oil and oil products by sea, products which account for roughly 70% of all of the EU’s oil imports from Russia.

Deliveries via the Druzhba pipeline will continue at the insistence of Viktor Orban’s “coalition”. The argument cited by Hungary, Czech Republic, and Slovakia is that their lack of ports prevents them from relying on alternative routes.

At the same time, Germany and Poland announced a voluntary refusal to import Russian oil through the northern leg of the Druzhba oil pipeline beginning in 2023.

According to the President of the European Commission Ursula von der Leyen, oil imports from Russia to the EU will be reduced 90% starting in 2023. The Czech Republic also plans to join the embargo by mid-2024. Slovakia and Hungary have not yet set dates for phasing out Russian oil and gas.

Whether the EU’s decision will lead to a reduction in global imports of Russian oil is still unknown. In May, petroleum energy exports from Russia increased by 6% over April. Other markets, such as India and China, are also being actively explored.

It is not clear what mechanisms can halt potential Russian oil imports under other labels, for example, as “Kazakh”, “Latvian” or “Turkish” oil. This brings to mind Shell’s decision not to define oil blends containing less than 50% of the Urals brand as Russian oil.

It is not clear how European (primarily, Greek) companies will be compensated for their loss of the income built on hedging tankers of Russian crude.

One way or another, however, the sanctions are a clear confirmation that EU members remain in solidarity, while not forgetting their goal of achieving carbon neutrality.

It’s worth noting that this embargo will be effective only in the event of a complete rejection of fossil fuels, development of energy efficiency programs, and a transition to renewable energy. Otherwise, supply disruptions or other difficulties could result in the EU being forced to cancel sanctions.

Marking the 100th day of the war, Ukrainian environmental organizations released a statement calling for a complete embargo on deliveries of fossil fuels from Russia. Such a blockage would end the financing for Russia’s military invasion of Ukraine.

Every drop of oil purchased from Russia is another drop of Ukrainian blood spilled all over the country, and every piece of Russian coal is another bullet fired at Ukrainian civilians. We must stop Putin and his war machine, restore peace, and end the fossil fuel addiction that feeds war in our country and conflicts in other countries of the world.

In the view of this, we demand:

European states in particular should assume special responsibility for this point and reduce demand for fossil fuels as quickly as possible. They must enforce an immediate embargo against Russia and enact full-scale decarbonization efforts by prioritizing energy efficiency and clean energy and by preventing dirty gas, oil, and coal from Russia from simply being replaced by fossil fuels from other questionable sources.

The open letter has already been signed by many community organizations, not only in Ukraine but from around the world. Add your signature now.

The war could result in weakened climate and environmental policies in Russia, including the possibility of the country pulling out of the Paris Agreements

The confrontation between Russia and the West has already resulted in the Russian Federation State Duma beginning to discuss the possibility of withdrawing from the Paris Agreements. Specifically, this would permit the nation to break its commitment to cut greenhouse gas emissions by 30% by 2030.

True, this idea was criticized by Russian Ministry of Natural Resources and the Environment. Minister Aleksandr Kozlov announced that Russia should not withdraw from the Paris Agreements and that statements on this topic are speculation for PR purposes.

As noted by the authors of an article in The Conversation, the military invasion and resulting sanctions could lead one of the world’s largest producers of emissions to put its climate policy on hold. Russia has not previously distinguished itself with ambitious plans for climate neutrality, but within the framework of international obligations it had agreed to achieve certain indicators by 2060.

Renewed “Cold War logic” could result in the country beginning to independently set its climate and environmental priorities. Doing so will deal a serious blow to global climate policy.

In addition, at present, research funding, in particular studies related to melting Arctic permafrost, has come into question. This financing was allocated within an international programmatic framework, and it is not yet clear whether that research will now be subsidized from the federal budget.

Today, we are also seeing rollbacks of climate policy issues in Russia. Lukoil, a key fossil fuel magnate, is pressuring the state to simplifying reporting on greenhouse gas emissions. At the same time, investors in renewable energy are beginning to leave the country’s market.

Dolphins continue to die in the Black Sea

Observers in both Turkey and Bulgaria, as well as in the temporarily-occupied Crimea are confirming observations of a significant increase in 2022 of hundreds of common dolphins (Delphinus delphis) becoming entangled in fishing gear and suffocating and/or becoming stranded.

According to Dr. Bayram Öztürk, head of the Turkish Marine Research Foundation (Tudav), there is not yet a scientific explanation. The main hypothesis is acoustic trauma resulting from the ongoing military actions taking place in the Black Sea.

Senior Researcher at Ukraine’s National Academy of Sciences Dr. Pavel Gol’din commented that the cause could be a combination of several factors, for example, intoxication, acoustic trauma, and infectious outbreaks.

According to Gol’din, a collegial community of Ukrainian scholars and experts is currently studying the war’s negative consequences for the Black Sea basin. They are evaluating negative chemical impacts, including rocket fuel compounds and ammunition. Harmful acoustic impacts are also under study, as are the effects of fires burning along the coastline.

Unfortunately, because a significant portion of the coast is either occupied or within the active combat zone, it is almost impossible to conduct reliable analyses using sampling methods. However, it is already known that many protected areas in the Black Sea region have suffered significant damage. Indeed, the Russian Black Sea Fleet flagship “Moskva” sank within in a protected area, an event that will certainly have negative consequences.

In an interview published by Krym.Realii, RFE/RL’s Crimean portal, Dr. Gol’din confirmed, starting in March, the deaths of large numbers of common “white-sided” dolphins across the Black Sea coasts of Turkey, Bulgaria, and Crimea. Some of the marine mammals were found stranded alive, meaning that they self-stranded.

Gol’din agrees that acoustic trauma could be a key factor contributing to weakening these animals. It has been previously scientifically proven that the low frequency sonar used by submarines damages the hearing apparatus of dolphins. Animals perceive the sounds at the same frequencies and are harmed as a result.

The fighting continues, which means that the likelihood of more marine mammal deaths remains present as well. Unfortunately, while the war continues, it remains impossible for now to analyze the war’s impacts on the Black Sea ecosystem as a whole.