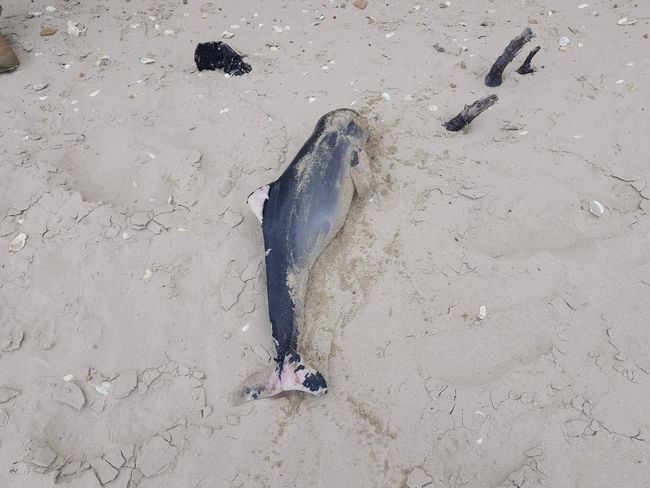 In recent weeks, UWEC experts have received repeated queries about the issue of mass dolphin mortality on the Black and Azov Seas. Readers wonder about a possible connection with the Black Sea Fleet and other units of the Russian armed forces. An August 2022 media announcement about the death of 3,000-5,000 dolphins is the reason behind this interest.

When discussing the environmental impacts of the war, people primarily think of land impacts. In fact, war has no less impact on the sea, and marine biodiversity is more sensitive to military impacts than in land-based ecosystems, primarily because water bodies are all interconnected. Toxins, noise pollution, and changes in chemical composition and water temperature affect all inhabitants of the oceans and seas one way or another. After all, sea creatures have no way to escape the water.

The three cetacean species found in the Black and Azov Seas were already facing the threat of extinction before the military conflict began. These include two dolphin species – Common bottlenose dolphin (Tursiops truncatus) and Common dolphin (Delphinus delphis) – and one small cetacean – Harbor porpoise (Phocoena phocoena). The dolphin species are listed in Ukraine’s Red Book, as well as on IUCN’s Red List, the Black Sea Red Book, and the international Agreement on the Conservation of Cetaceans of the Black Sea, Mediterranean Sea, and Contiguous Atlantic Area (ACCOBAMS).

Dolphins are affected by some of the very same factors that affect people: munitions explosions, gunfire, and many types of pollution. However, there is one impact (involving sometimes deadly results) that is critical for dolphins but unfamiliar to humans.

Potential causes of death for cetaceans

Dr. Pavel Goldin, biologist and senior researcher at the Schmalhausen Institute of Zoology (Ukrainian Academy of Sciences) and projects coordinator at the Ukrainian Science Center of Ecology of the Sea (UkrSCES), has written at length on the possible reasons for cetacean mortality.

According to Goldin, there are several working hypotheses for such significant cetacean mortality. The first involves an increase in infectious disease, possibly stemming from sewage entering the sea or a naturally occurring illness. Another hypothesis is related to the acoustic trauma caused by military combat and explosions and other underwater noise disturbances. Lastly, there may be some other as yet undiscovered or poorly understood factor.

Another likely possibility is the interaction of several factors at once. It is possible for two different infections to occur in combination with acoustic pollution. Infection, acoustic trauma, and some type of toxicity could co-occur.

In order to understand what is really occurring, it is critical to perform autopsies on dead animals, collect samples, and conduct analysis. This work is largely taking place in Turkey, where Ukrainian researchers are also employed.

This article will take a look at several factors that could be key to understanding the war’s impacts on dolphins and the entire Black Sea ecosystem.

When wastewater treatment facilities and irrigation systems are damaged or destroyed, wastewater enters natural water bodies. This waste is untreated and thus rife with biological agents and organisms, some of which can be pathogens.

These substances could quite possibly have entered the sea, but researchers cannot yet make that determination – they simply do not have the water access needed to study the issues. In addition, Russian forces dropped the equivalent of 714 metric tons of TNT explosive on the site, located directly on the Azov Sea coastline.

There was an earlier strike on 14 May 2022 on the Azovstal plant using 9M22S incendiary ammunition with thermite layers. A video of this shelling clearly shows how the incendiary mixture pours into the sea.

Given that the Azovstal plant is a large industrial site on the shoreline of the Azov Sea, scientists believe that most of the chemical products of these explosions end up in the sea due to air currents and rainwater runoff.

Another source of marine pollution is spent rocket fuel dumped into the water by submarines launching missiles. That explosive contains heavy metals, plasticizers, and stabilizers.

In today’s conditions, dolphins are especially vulnerable in their position at the top of the trophic pyramid in the sea environment. They are the final link when it comes to the accumulation of heavy metals and other pollutants.

A dolphin’s perception is based largely on acoustic signals, and the species uses echolocation to navigate in water. They depend on sonar to receive and transmit signals to orient themselves.

Submarines emit signals at frequencies that are perceptible to these cetaceans. However, these mechanical signals are louder than dolphins themselves and can become a source of stress and acoustic trauma, damaging the dolphin’s inner ear, which is used for both navigation and hearing. As a result, the dolphin is essentially “blind.”

Unable to orient themselves, dolphins cannot find prey and begin to starve. They can also become confused and panicky, accidentally swimming into rocks or stranding themselves on shore. Others die from exploding naval mines.

Ultrasonic and other ship noise can chase dolphins into fishing gear or cause them to strand themselves on the shore. Goldin also noted that military action can provoke the sea’s transformation into an environment that is simply not suitable for cetaceans, sometimes over a long period:

“Noise pollution can also disrupt many fish populations and force them to migrate. This upsets the ecosystem balance, resulting in additional dolphin mortality. This chain reaction can threaten entire sub-populations, requiring many years to recover.”

These are some criteria for determining uniqueness and lethality. They could be applied, for example, if tomorrow, God forbid, the Russian navy destroys a specific unique area in a nature reserve, wildlife refuge, or biosphere reserve. Such places exist on the seafloor, for example, in the northwestern Black Sea, exactly where intense hostilities are occurring. It’s no secret for researchers that the battleship Moscow sank there. The vessel was towed directly into the middle of a national marine refuge, where it sank.

So, the first criterion is uniqueness: when irreversible damage is done to a unique ecosystem, it is a very big loss. If the damage is reversible, then the damage estimate depends on the time it takes for the ecosystem to recover. One area may need five years, while another might need 50 years. Some sites can be restored thanks to human efforts, while in other cases, it will be of little help.

The second criterion to examine is lethality. That is, who will die, how many individuals will die under the influence of a particular factor. These factors include mortality from toxins, highly lethal or persistent, that is, long-acting factors. Ammunition and munitions contain a lot of similar dangerous chemical compounds, for example, chlorine and its compounds.

Disease-causing agents also fall under the category of lethality. These may enter the sea as a bacteriological weapon, or accidentally as a result of damage at an agricultural site. Their distribution leads to disease in marine animals, including these same dolphins. We discovered this pollution mechanism even before the large-scale war, when dolphins began to suffer from toxoplasmosis caused by effluent leaving Russian agricultural farms in the Krasnodar region. Marine noise pollution is also a deadly factor for cetaceans.”

Can reported mortality estimates be trusted?

Scientists are noting an increase in cetacean mortality this year. Also, there are more frequent cases of encountering beached dolphins – that is, self-stranding. This may also be due pressure on them stemming from baseline underwater noise originating from Russian military vessels. It is mainly the rarer Harbor porpoises and Common dolphins that die.

The first series of deaths were noted in March in Turkey, when numerous (100+) Common dolphins were stranded on the shore. Further, similar incidents were recorded in Bulgaria and Ukraine, primarily along the Crimean Peninsula. Subsequently, there were reports of similar events happening in Russian waters. Isolated cases were recorded in the northwestern Black Sea, in Romanian and Ukrainian sectors.

Scientists are still far from an accurate quantitative assessment. But, in their opinion, it can be argued that this mortality spike is quite significant, perhaps the biggest in the last decade. To date, we are talking about several hundred (not thousands!) cases of dolphin strandings, confirmed in photos and videos. Of these, more than one hundred were in Ukraine – mostly along Crimea and southern Odesa regional shorelines.

The number of dead animals is most likely still greater than the number of those who washed ashore. However, many media reports of “thousands of dead dolphins” are still greatly exaggerated.

In each country, scientists work in their own national waters, and specifically in the 12-mile exclusive zone. Ukrainians do not have this option. Mines and other threats mean that there is a direct ban on going to sea and exploring the coast. A few sites within the city of Odesa’s borders are almost the only place in Ukraine where scientists have at least limited access to the coastline. As a result, Ukrainian scientists must work either in another country (Turkey or Bulgaria) to gain physical access to our common sea or work remotely using satellite monitoring data.

Currently, scientists are busy determining the scale and causes of this increased mortality among cetaceans in the Black Sea basin. Until data collection and analysis is complete, hypotheses are the only information available. Experts plan to publish the results of their analysis by the end of 2022.

How can people help gather data and determine causes of death in wildlife?

Anyone who vacations, lives, or visits the Black Sea coast can help scientists!