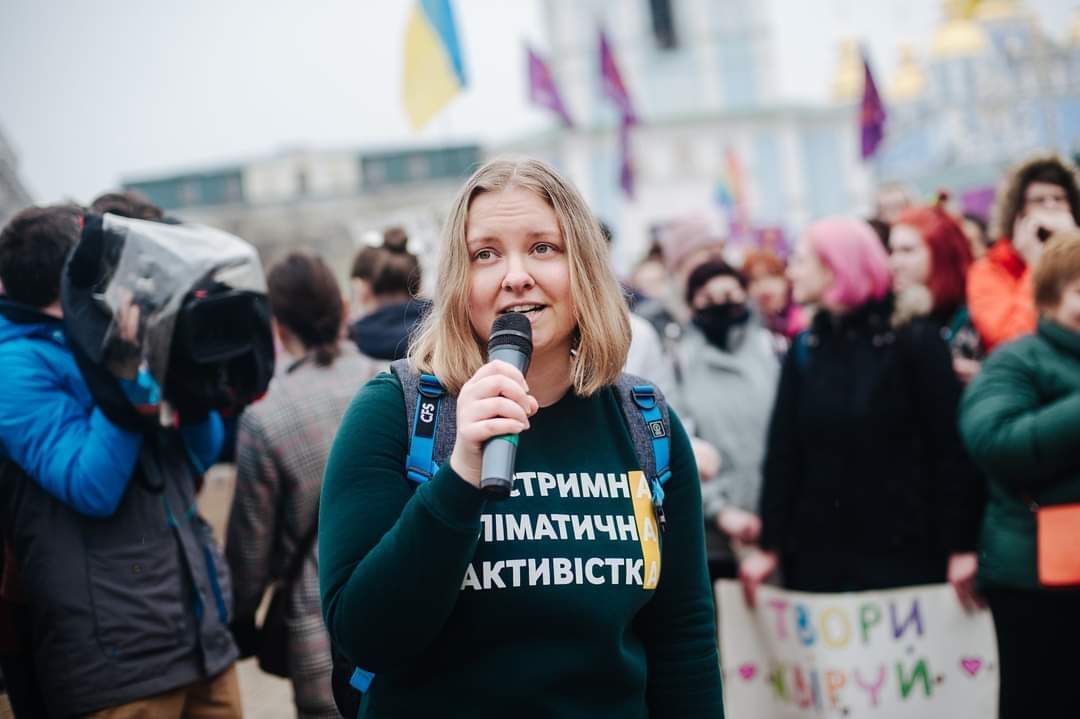 We continue our series interviewing the Ukrainian environmental activists, experts, and scientists dealing with the war’s environmental consequences. Our latest conversation is with Olha Boiko, coordinator of Climate Action Network Eastern Europe Caucasus Central Asia (CAN EECCA) and climate change campaigner at Ecoaction.

We spoke about the biggest environmental challenges facing Ukraine today, how NGOs can conduct environmental activism during wartime and how international and regional organizations (including CAN EECCA) continue their efforts to address environmental and climate challenges in the region.

Olha, you were in Ukraine at the beginning of the invasion, and that you still live there now. When did you start to understand the environmental consequences of Russia’s invasion? When did you realize that this invasion is a disaster not only for Ukraine as a state, but also for Ukraine in terms of nature and ecosystems?

When the full-scale invasion happened, the first priority for every Ukrainian was to get to a safer place than where we were at that moment. After we did that we started thinking about how we can leverage our strengths, our knowledge, and platforms to help Ukraine fight. At Ecoaction, a Ukrainian NGO, one of the working groups we created in the beginning of March was documenting environmental crimes. It was obvious that Russia was targeting energy infrastructure and fuel storage, both of which caused a lot of pollution, but it was also anticipated that bombing, fires, and disturbances of Chornobyl’s soils are all environmental risks.

You participated actively in creating a petition to “end the global fossil fuel addiction that feeds Putin’s war machine.” The goal was to stop import of Russian fossil fuels in the EU. Can you tell us more about this initiative? Did you achieve any results?

In the climate movement, one of our strengths is campaigning and international networking. We have activated every asset we have, easily identifying the connection between the EU’s dependence on Russian fossil fuels and the arrogance with which the Russian state invaded Ukraine. The money used to produce and buy weapons comes mainly from fossil fuels and this connection was highlighted in the petition. The letter was signed by more than 800 organizations in 57 countries. Since then, there has been a huge push by activists, journalists, NGOs, and governments to embargo Russian fossil fuels. I believe the speed with which these decisions were taken to the EU Commission was unprecedented.

Of course, for Ukrainians, every extra day of waiting is an additional chanсe of being bombed, so there was a lot of concern regarding the speed with which the sanctions were implemented. We were asking for a full embargo on all Russian fossil fuels and uranium. The US banned oil, liquified natural gas, and coal on 8 March, but the EU highlighted its dependence by moving much, much more slowly. However, on 1 August, Europe’s embargo on Russian coal finally came online and an oil embargo will begin at the end of the year for most imported oil. Natural gas is the biggest challenge for countries like Germany, which relies heavily on Russia for that fuel. Nevertheless, we are a long way from stopping our advocacy. A ban on Russian fossil fuels must be permanent and must be only the first step in the global fossil fuel phase out.

As coordinator of CAN EECCA, tell us about the positions of CAN International, CAN Europe and other member organizations of the Climate Action Network regarding Russia’s invasion of Ukraine? Does CAN have any instruments for influencing Russia or any programs that help address the war’s environmental and climate consequences?

There are two sides to this story. I believe CAN fell into a trap similar to that of the EU, where a large coalition and many stakeholders made them slower to react and less radical than smaller NGOs. CAN Europe published a statement on March 4th, while CAN International did not publish any statement at all. The situation was further complicated by the fact that both Ukraine and Russia are part of the EECCA region. The issue became even more complicated as the sanctions began to hit, and many Russian NGOs, our members, started to flee the country and seek support alongside millions of Ukrainian women and children running from the war and also seeking help in the EU. International organizations tried to support both Ukrainian and Russian activists at the same time. As an institution, CAN had never previously actively condemned any specific war or conflict and had mostly focused on drawing connections between the climate crisis and military conflicts and their impacts on people. That said, I can hardly think of another war on this scale with such huge implications for global energy security and food security as Russia’s current war on Ukraine.

On a more positive note, the network has helped immensely in reaching out to news media and politicians both in the EU and the US. I was also able to travel to Brussels and meet CAN Europe members to personally discuss the need for embargo advocacy. Connections between NGOs based in the EU and in Ukraine have strengthened and now we have more ways to advance our messages. So connections strengthened through CAN are extremely valuable. We’re not talking about concrete reconstruction projects yet, but I can’t rule out more joint projects between CAN Europe and CAN EECCA members from Ukraine in the near future, especially given that Ukraine is now a candidate for EU membership.

What was the reaction of environmental organization members of CAN EECA to the war? I know there are many Russian NGOs in your network. What was their first reaction, and what is their position now?

A few members from Russia cautiously reached out to me, saying that they are very sorry about what is going on. One member reacted immediately [with a position] on 25 February, but it was heavily criticized by Ukrainian members as it wasn’t concrete and bold enough. A lot of relationships have now been broken forever, and the trauma Ukrainian civil society is currently experiencing will be in people’s memories for a long while. To complicate things, as I mentioned earlier, Russian NGOs were starting to face additional problems now too and some were deciding whether to stay in the country. This resulted in greater focus by Russian activists on their own situation, leaving no resources for public statements.

In general, due to the fact that Russia’s role in the EECCA region is of colonial nature, NGOs from all other neighboring countries have expressed their full support to Ukraine’s fight and many are still actively helping the refugees, advocating for phase out of Russian fossil fuels or donating.

You are also a member of Ukrainian environmental organization Ecoaction which is also actively monitoring the war’s environmental and climate impacts. Tell us more about your activities? How can our international readers get involved and help your work?

Ecoaction is one of the biggest environmental NGOs in Ukraine. We advocate for energy efficiency, renewable energy, countering climate change, clean air for all and sustainable development of transport and agriculture in Ukraine. My role is engagement of NGOs through networking (namely CAN EECCA and Ukrainian Climate Network). Our work has changed substantially since 24 February. We launched three new directions of work: sanctions on Russian fossil fuels, environmental impacts of the war, and Ukraine’s green post-war recovery. We continue advocating against nuclear energy, especially having had two of our nuclear power plants occupied by the Russian army. We covered the issue of food security when it became obvious that the Russian army was deliberately destroying wheat storage facilities and blocking grain exports. In general, all our topics are still relevant and are now united under the umbrella of a green post-war recovery. We have been fighting for a climate-neutral Ukraine for many years, and we’re continuing to do so while responding to the urgent need to stop the war as soon as possible. You are welcome to support us and subscribe to our Twitter account.

Today, a number of international initiatives monitor the direct and indirect environmental/climate impacts of the war in Ukraine. Are there any aspects or sectors being overlooked by the international community? Which ones are the most important for your work?

It’s hard to say if anything is being overlooked, but the data we’re currently trying to collect is the volume of greenhouse gas emissions caused by Russia’s full-scale invasion. We know that, in theory, wars are bad for the climate, and I would additionally argue these emissions are Russia’s responsibility and should be counted as such.

The most relevant impacts for us are, of course, long term; they will determine Ukraine’s capacity to develop as a climate-responsible country and set the stage for recovery. The fewer fields burn, the more food we can produce next year; the less energy infrastructure is damaged, the more we can plan our own fossil fuel phase-out and modernize the nation. All of this depends on how quickly Ukraine can win and launch a full-scale recovery. So, I would say that even when collecting data on environmental impacts we still need to actively help Ukraine win this war and prevent those consequences from even occurring.