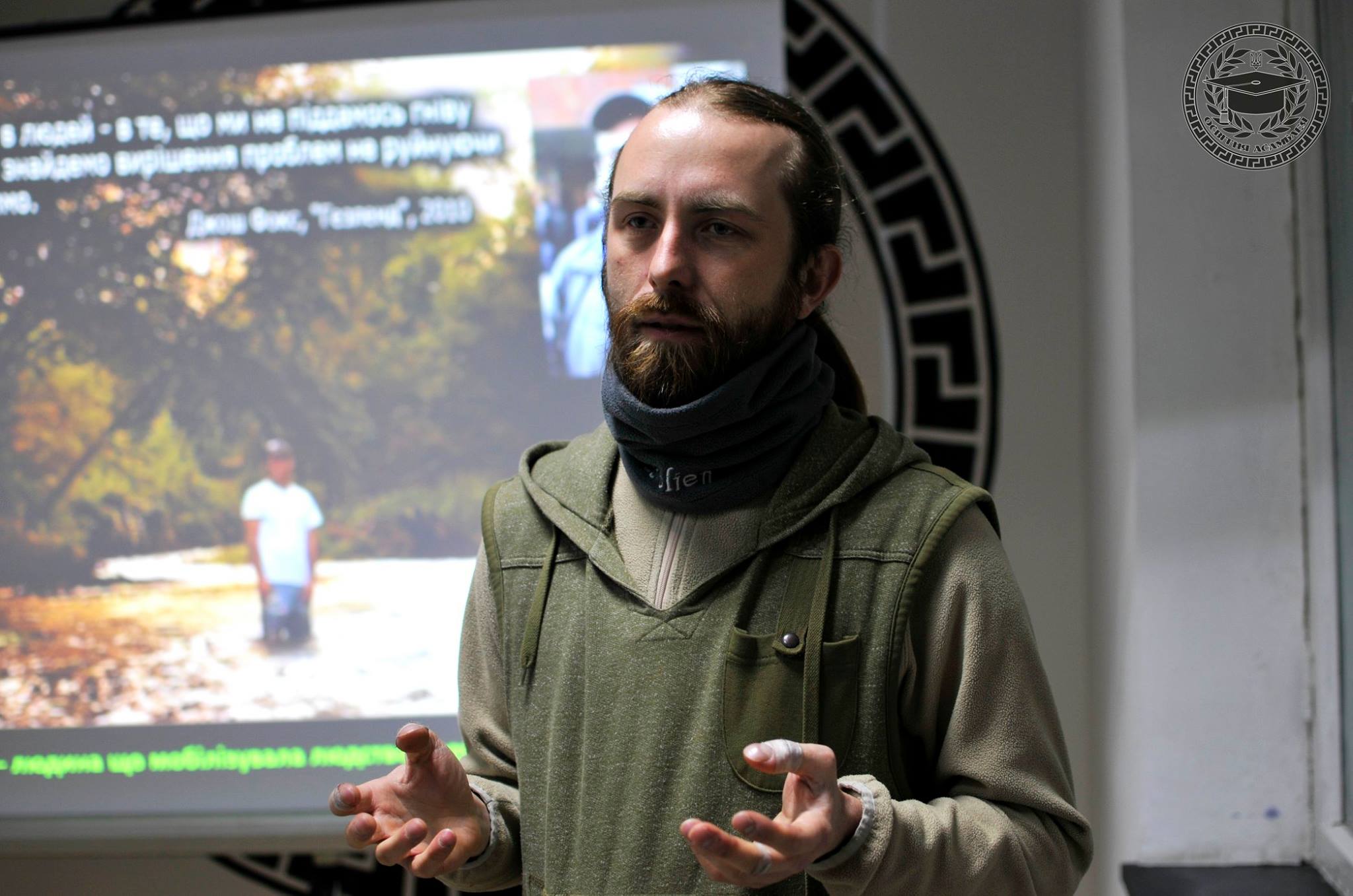 Oleksii Vasyliuk has been tracking the environmental impacts of the war in Ukraine since 2014. Over that period, he has co-authored several books dedicated to the negative impacts of the hostilities on the environment as well as violations of environmental policy and law in Ukraine’s occupied territories. We spoke with Oleksii and discussed both the war’s likely consequences and ways for civil society to minimize them.

– Hello, Oleksii. Tell us a little bit about yourself and the Ukrainian Nature Conservation Group.

– I’m a biologist; I graduated from Shevchenko Kyiv State University. I have worked since 2004 at the Zoology Institute at the Ukraine National Academy of Sciences, in the Wildlife Monitoring and Conservation Department. I’m also active in a variety of community initiatives.

Unfortunately, and unlike Western nations, science in Ukraine does not have a structural understanding of conservation biology. Biological diversity conservation is a separate branch of science, while here, it’s more along the lines of a hobby, an applied activity that you do in your spare time.

Thankfully, at our Institute the importance of nature conservation is understood and supported. Overall though, the community of specialists that are interested and engaged in conservation issues is broader than the employees at just one institute. There are professional conservation specialists at the Institute of Botany, universities, and national parks and reserves.

At first we worked in different places and in various public associations. Then we realized the community needed an official status; to transition from an abstract “we” to activity on behalf of some institution, public association. This is where the idea of the Ukrainian Nature Conservation Group came about; we registered it in 2018.

Our team consists almost entirely of professional biologists who make nature conservation their priority. UNCG’s mission is to unite experts, biologists, and ecologists in support of the environment and the implementation of European environmental legislation in Ukraine. All of our members have worked together for a long time and we trust each other.

In my free time, I collect intellectual music of the 1970s. It creates an atmosphere that helps me both relax and focus.

Right now, during the war, our work is totally unlike what we do in peaceful times – we help protected areas employees in occupied territories or that have fled, losing their homes in destroyed cities. We have been collecting funds for them. It’s all a lot of work, but we are trying to support everyone who needs help.

Ukraine is experiencing its second war in the last ten years. Prior to today, there was fighting in 2014-2015. Was there monitoring and analysis of negative environmental impacts at the time?

First off, I want to say that this is a single war that started in 2014.

From 2015-2018 I worked for the NGO Environment–People–Law (EPL) and studied the impacts of military action on the environment. EPL is truly the first organization in Ukraine to have begun serious analysis of those impacts.

I think that at that time, the war was different. The Donbas region has large industrial zones and dense population centers, surrounded by significant, sparsely-populated natural areas. Fighting often took place in forests and open spaces. Separatists tried to protect urban infrastructure.

Today, the war is taking place in lands where there are many small settlements surrounded by agricultural zones. Wilderness is less impacted. But cities are being almost completely destroyed, which can have far-reaching negative impacts for the environment.

All these destroyed cities will eventually need to be rebuilt and the resources for that will come from the landscape. They will be built using sand, concrete, stone, and wood taken from nature. This means that natural ecosystems will be under threat of development.

Going back to the fighting in 2014-15, we tried to collect and analyze as much data as possible. It wasn’t easy, of course, especially since most of the land where combat took place ended up occupied.

Our work resulted in the publication of several books – the Influence of Military Activity on Ukrainian Nature and Crimea’s Environment: Changes and Losses During Occupation. Colleagues and I also published several articles in refereed journals.

Our studies on the war’s negative impacts were not the only ones; there is now a specific methodology and knowledge base that exists for analyzing today’s consequences. The challenge is that fighting is ongoing and we can’t readily monitor the situation or collect data.

Of course, studying these environmental impacts is a big part of the work. Since the hostilities have continued more or less since 2014, you can imagine the scale of the problem. There are also the environmental impacts of military exercises to consider. The biggest of these took place in Oleshky Sands National Nature Park (occupied today). Military training grounds in the occupied Luhansk are also situated in nature refuges.

Of course, we were in total opposition to “military” use of nature, even if it’s not generally done to speak out against training exercises during wartime. Still, you can’t defend your country with one hand while the other one destroys its natural heritage.

Oleksii, given the depth of your experience in studying the environmental impacts of the war, can you predict the impacts of the events occurring today in Ukraine?

You know, we can’t even get a clear picture of the impacts of the fighting in 2014-2015. Significant areas have been occupied since 2014, and we haven’t been able to study those areas at all. So, predicting impacts is challenging today. All the more so, given that fighting has now spread across almost all of Ukraine, and all large cities are being bombed, including in the western part of the country, which, of course have a negative impact on the environment. Many speak of fires at oil depots, and we must also remember that sewage treatment plants, water transport facilities, and the general negative impacts of infrastructure destruction on the environment.

We can classify the types of impact and collect open-source data, and we have the tools to do that, for example, using satellites. We also gather a lot of information by monitoring news coverage. I spend several hours every day scrutinizing social media channels and tracking regional news. Occasionally, there are tidbits that we try to verify and analyze from an environmental impact perspective. And alas, if we miss even a day of that sort of work, we will lose some data forever. There is a huge amount of news and it will be impossible to track hundreds of thousands of messages months and years down the road.

That said, reliable information on the war’s impacts is very limited. That was clear in 2014-2015 and the same is true today. For example, when we collected information about natural resource use in Crimea, we found very little available data, and what we found was difficult to collect and analyze.

It’s also impossible to collect just a few samples in the sites that we can access and then those samples to calculate quantitative indicators that would allow us to understand the consequences of annexation or occupation. Ideally, samples should be collected at the moment the pollution occurred, and that, I’m sure you understand, is not possible in combat conditions.

Long-term research in places hardest hit by the war are needed in order to comprehend the full scale of the impacts. And for that to happen, the combat must end and we need to get access nationwide. We must also keep in mind that it could take years to remove mines and ordinance. So, we will not be able to access many areas in the near future.

You mentioned that combat is mostly happening in cities and not in conservation areas and that rebuilding infrastructure may inflict the biggest blow to nature.

Yes. I think that compared to 2014-2015, nature is taking less direct damage from today’s hostilities. For the most part, the war is happening in agricultural areas with more fields and small cities than in nature reserves and national parks.

But tomorrow all these cities and villages will need to be rebuilt. Sand, granite, and other natural materials will be needed.

Ukraine’s land code is unique in that it does not permit resource extraction on agricultural lands, most of which are privately owned in the country. These are very large spaces, the areas of which will likely only increase, leaving only a few percent in natural ecosystems.

In recent years, we have already had to oppose mining activities for building materials in protected areas several times, including, for example, beryllium mining in Polesie Nature Reserve. At UNCG, we strive to monitor cases such as these as actively as possible and bring them to the public’s attention. We often manage to halt destructive projects. But if their number increases tremendously, will we be able to mitigate the extraction of sand, chalk, crushed stone, and logging?

It would be helpful if reconstruction could follow principles for a “green” and “sustainable” economy. But for that to happen, these principles must be implemented. And even before the start of the war, environmental concerns were not always taken into account when planning resource extraction.

Tell me what international organizations, activists, and caring people can do today to minimize the negative environmental consequences of the war?

It’s hard to imagine how to minimize those consequences. They will happen no matter what we do.

The first thing we need is for the war to end as quickly as possible. The longer it goes, the more destruction. Moreover, it should also be said that during the war, we can’t engage in conservation work. For example, we can’t monitor the agricultural sector that is continuing to convert natural spaces to farmland while the war is ongoing; we can’t track logging in forests where entrance is prohibited due to martial law.

So, in my view, community organizations should come together to bring the war to an end. As quickly as possible. Such collaboration will also enable us to plan and implement successful restoration projects that are also environmentally friendly.

I think that we will be successful if we can unite our efforts. We must collect, process, and analyze data and develop and use analytical tools. We must ensure that Ukraine’s reconstruction does not result in the destruction of nature.