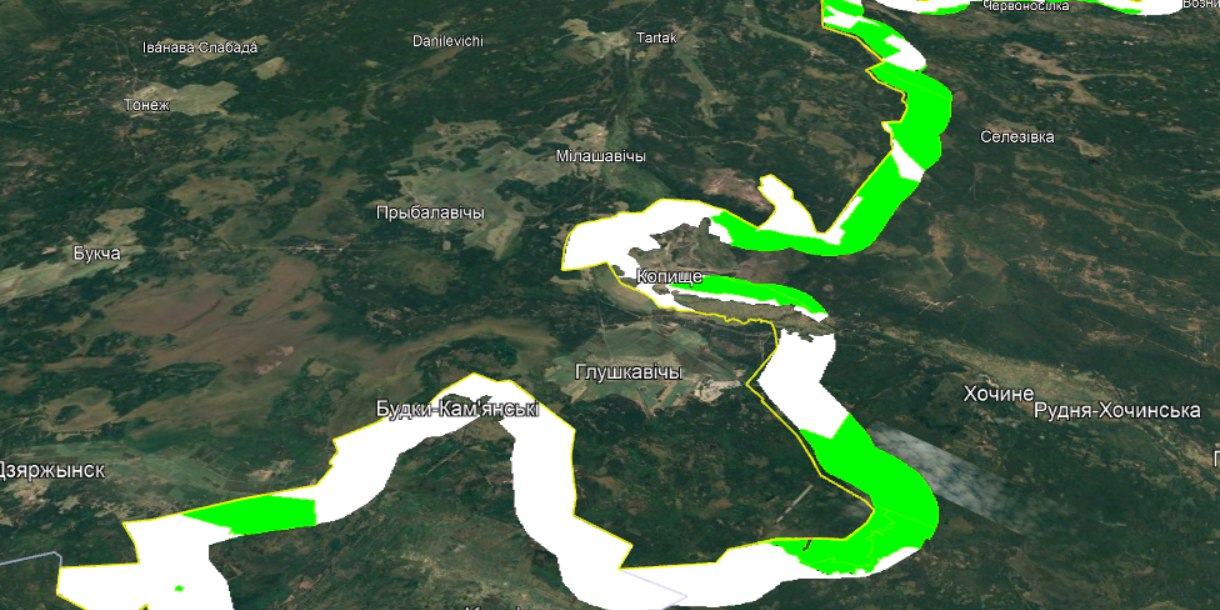 On 21 September, Ukraine’s Supreme Council adopted Bill 7475 in its first reading. The bill is intended to strengthen protection of Ukraine’s state borders, but content-wise, it is primarily devoted to procedures for removing land from the Natural Reserve Fund (NRF).

According to the bill, the border zone (two kilometers wide) promises to be more secure and better protected than it has ever been previously. Under the bill, economic activity will be more limited than in national parks.

In this article, UWEC Work Group will analyze why land withdrawal from the NRF is the worst possible solution in this situation. (It was specifically proposed as a legislative solution.) At the same time, alternatives that seem more preferable exist.

Similarly, on the Belarusian side, protected areas also gravitate towards its border with Ukraine. This is no coincidence: the border zone between Ukraine and Belarus forms the Polesye natural zone along the Pripyat River valley. Central Europe’s mild climate is dependent on the Pripyat’s watery landscape. It is here, where economic activity is limited and where there are many more undisturbed natural ecosystems, that one of the most valuable natural corners of northern Ukraine and Europe as a whole is located.

Ukraine has unique experience creating protected areas simply by strictly limiting the presence of people: the Chornobil Exclusion Zone surrounding the Chornobil nuclear power plant. Over the last 30 years, the lands of defunct collective farms and villages have merged to become the largest natural area in Central Europe. Today, it is a biosphere reserve and also the largest protected area of all those located along the border.

Swamps and forest lands in the border zone will soon become biodiversity oases if they are allowed to recover. Another 174,400 hectares of land in the two-kilometer zone found along the part of the border shared with aggressor countries are natural areas that are not part of the Natural Reserve Fund. Nothing prevents Ukraine from declaring them an NRF territory with a particularly strict protection regime and adding them to the 120,000 hectares of already protected lands. Furthermore, the national economy will not suffer from such a decision. Government agencies have not yet realized this.

However, almost all of the border areas – forests and impenetrable swamps – are excellent natural obstacles for the advance of enemy troops. In the early spring of 2022, dozens of Russian tanks bogged down in the swamps of Ukrainian Polesye. It became clear that in order to increase defensive capability, the natural swamps in northern Ukraine required protection of existing wetlands and refilling drained swamps. The better natural landscapes are preserved, the more water they will collect, the better they will protect Ukraine from military invasion. However, no one has yet proposed restoring Polesye’s wetlands for the purpose of defense or transferring them to the NRF.

Preservation of the Natural Reserve Fund as Ukraine’s national heritage is provided for by certain Ukrainian laws. Until 2022, there were no questions in Ukraine regarding whether the border zone was compatible with land in the Natural Reserve Fund. Now, however, this issue has risen to the highest level of decision-making: introducing legislative amendments.

At a time when Ukraine’s defense is foremost on the agenda, no one is seeking expert input regarding coordination of defense and nature protection.

Defense objectives: Cancel that which should have been defended?

This article examines Bill 7475, namely, the version adopted in its first reading. In accordance with the bill’s explanatory note, its purpose is to improve protection of the state border and clarify the Ukrainian State Border Guard Service’s powers.

At the same time, some regulations in the bill may lead to a reduction in Ukraine’s Natural Reserve Fund and thereby jeopardize preservation of Ukraine’s national heritage (and possibly become the direct cause of its destruction). In considering the proposed version of the legislative amendments, it should be recalled that the border zone is two kilometers wide. That includes the width of Ukraine’s border with Russia and Belarus.

Firstly, the draft law proposes to amend the law “On the Natural Reserve Fund of Ukraine,” and establish that:

During martial law and within one year from the date of termination or cancellation of martial law in Ukraine, changing the borders or canceling the status of territories in the Natural Reserve Fund for the purpose of construction, arrangement, and maintenance of engineering, technical, and fortification structures, fences, boundary signs, border clearings, and communications within the border zone is carried out by the State body authorized to make decisions on the creation or declaration of territories belonging to the Natural Reserve Fund on the basis of a request from the central body of executive power implementing state policy related to protection of the state border of Ukraine.

In general, the Ukraine-Belarus border area affected by the bill contains roughly 65,000 hectares of protected areas and another 56,000 hectares along the border with Russia. In total, 90 territories belonging to the Natural Reserve Fund in various categories are located along land borders with aggressor countries.

In addition, the bill provides that such legislative changes will be valid solely for the period of martial law and within one year from the date of termination or cancellation of martial law in Ukraine. However, at the same time, it proposes to make final decisions on the withdrawal of territories from NRF. So, some of these may be “temporary adoption of final decisions”?

The question arises as to what will happen next? Looking ahead on this line of thinking, it may be possible to propose eliminating strictly protected reserves by a decision of the Ministry of Regional Construction or the Ministry of Infrastructure in order to extract crushed stone, sand, and timber, and again justify it for defense purposes. And the fact that the Natural Reserve Fund is Ukraine’s national heritage (as per a legislative regulation) and its protection is a task for Ukraine to undertake does not seem to bother anyone in the government. If not the protection of national heritage, then what is the goal of Ukraine’s defense?

Secondly, the draft law proposes to add a new section to Article 46-1 of Ukraine’s Land Code, according to which lands within protected areas and other lands belonging to the Natural Reserve Fund along the state border are transferred to military units of the State Border Guard Service for the construction, development, and maintenance of engineering, technical, and fortification structures, fences, boundary signs, boundary clearings, and communications.

The bill’s authors do not appear to be specialists in land law, because Article 46-1 only defines restrictions on the use of lands within the Natural Reserve Fund while omitting regulation of granting tracts of land of the Natural Reserve Fund for use. They wrote a new regulation about “transfers” in a section that is devoted to completely different issues. So the bill is not only harmful to wildlife, but also legally absurd.

Given that the draft law proposes to significantly expand the border zone along the border with Belarus and Russia, this regulation will lead to the transfer of lands belonging to reserves and national parks, territories, and other protected lands in other categories to Ukraine’s State Border Guard Service, whose mission does not include management of the Natural Reserve Fund. This change could result in the destruction of the natural values ​​of Natural Reserve Fund lands currently protected by the state as Ukrainian heritage. This also applies to objects included in international biosphere reserves and those protected by UNESCO.

At the same time, the Ministry of Natural Resources’s responsibility for the protection of NRF lands is not to be transferred to the Border Service. In other words the law’s authors do not plan to transfer the function of protection and management of nature conservation areas to the State Border Service together with the lands. It follows, therefore, that this feature will be deprecated.

What are the potential impacts of Bill 7475’s approval?

The changes in the boundaries of protected areas envisaged by the bill will require tremendous expenditures over many years while the state develops draft decisions to change the intended purpose of land plots, eliminate NRF status for specific lands, develop new land management projects, and resolve other land issues subject to the (temporary) transfer of sites from the NRF into the category of defense lands. Relevant financial and economic calculations did not accompany the Draft Law.

In fact, there is a way around the somewhat far-fetched contradiction between protected and border status.

Combining these statuses will be advantageous for both defense and nature conservation issues. Waterlogged, practically-impenetrable forests and open swamps that comprise almost the entire northern border of Ukraine create an insurmountable obstacle to the advancement of military equipment.

When Russian troops invaded northern Ukraine in February and March of this year, dozens of tanks and other combat vehicles became stuck and were left behind in the wetlands. Keeping areas in a natural, waterlogged state (rather than paving transportation routes) is the best safeguard against large-scale re-invasion in the future.

UWEC Work Group has already described in detail how the attack on Kyiv was stopped by creating a water barrier by flooding the Irpin River valley. Nature conservation will also benefit, given that the border status of these areas will undoubtedly be the best protection against most types of economic activity. By retaining both nature protection and border status for these lands, Ukraine will achieve a better border that is both impassable to the enemy and afforded greater protections for nature.

Experience in building border fortifications in many countries shows that, with proper planning, only a small portion of ​​the border zone is affected during installation of defensive infrastructure. Issues of construction and maintenance of engineering and fortification structures, fences, border signs, border clearings, and communications in the Natural Reserve Fund can be regulated by establishing special regimes and easement rights where needed and developing a clear cooperation algorithm between the State Border Service and the Ministry of Natural Resources. Such practices could obviate liquidating protected areas, exposing Ukraine to international scandal, and weakening its position for European integration.

There is another obvious plus to this mutually beneficial approach. Within border protected areas, the outer border most often coincides with the state border. But there is also an inner border, usually more than five kilometers away from the outer border. The inner border aims to shield protected areas from illegal economic interference and penetration by Ukraine’s own citizens and economic actors. These protected areas are guarded by the federal inspection service. For the most part, these are people who know and understand nature well, experienced trackers who notice the slightest changes in the environment.

In addition to that work, such people also are skilled in reducing poaching. The environmental inspection service for protected areas has long been in need of strengthening. Why not take the path of transforming the border zone and providing an important additional internal border with surveillance cameras and other professional and technical tools that can facilitate the work of border guards?

When conservation and border security successfully coexist, the environment wins.